This summer we hosted a series of Shoreline Science Talks outdoors on our campus in Walpole along the shores of the Damariscotta River.

Participants learned about the research that some Darling Marine Center based UMaine graduate students are working on.

The events were free but tickets were required. 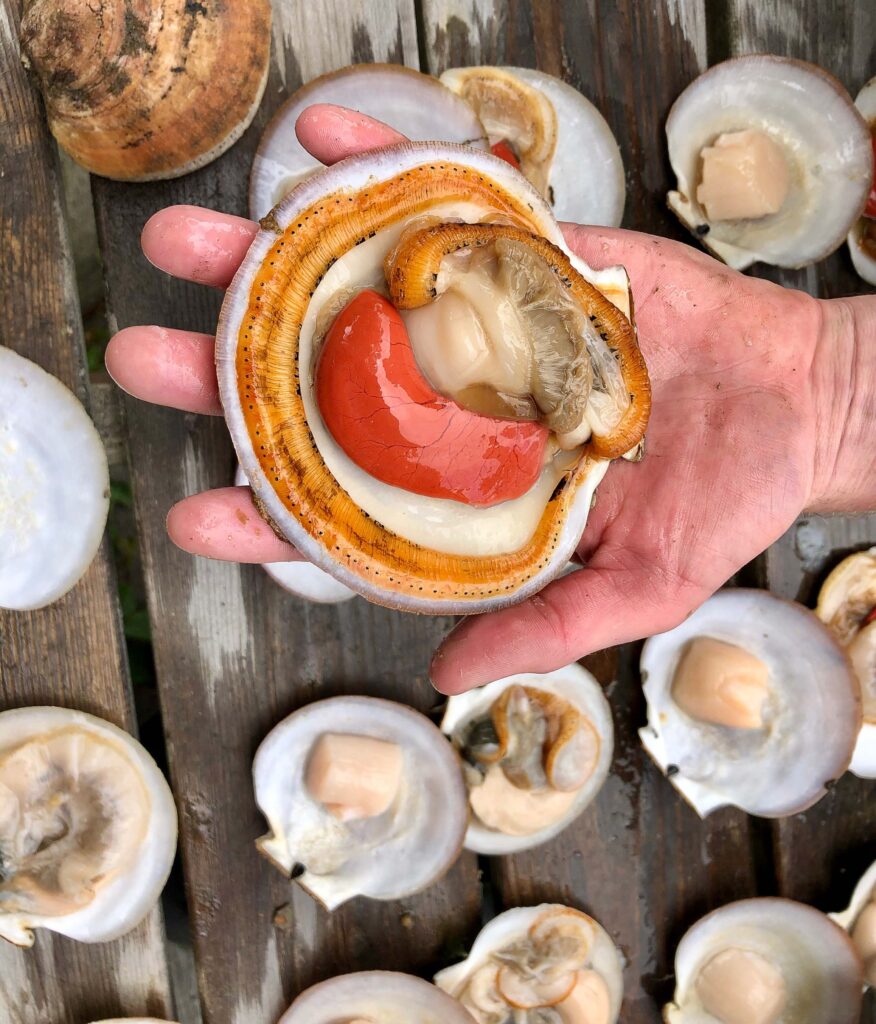 Struan shared “our work with sea farmers in Maine has both local and national implications. For years, Maine’s most valuable export has been lobster. Changing seas and coasts are threatening the industry, the working waterfront, and, ultimately, Maine’s coastal heritage. Aquaculture holds the potential to sustainably increase domestic production of seafood and prevent the worst consequences of climate change from impacting coastal communities. Our work aims to better understand aquaculture site selection and production techniques to ensure that the expansion of the industry benefits both new growers and those that already work on the water.” 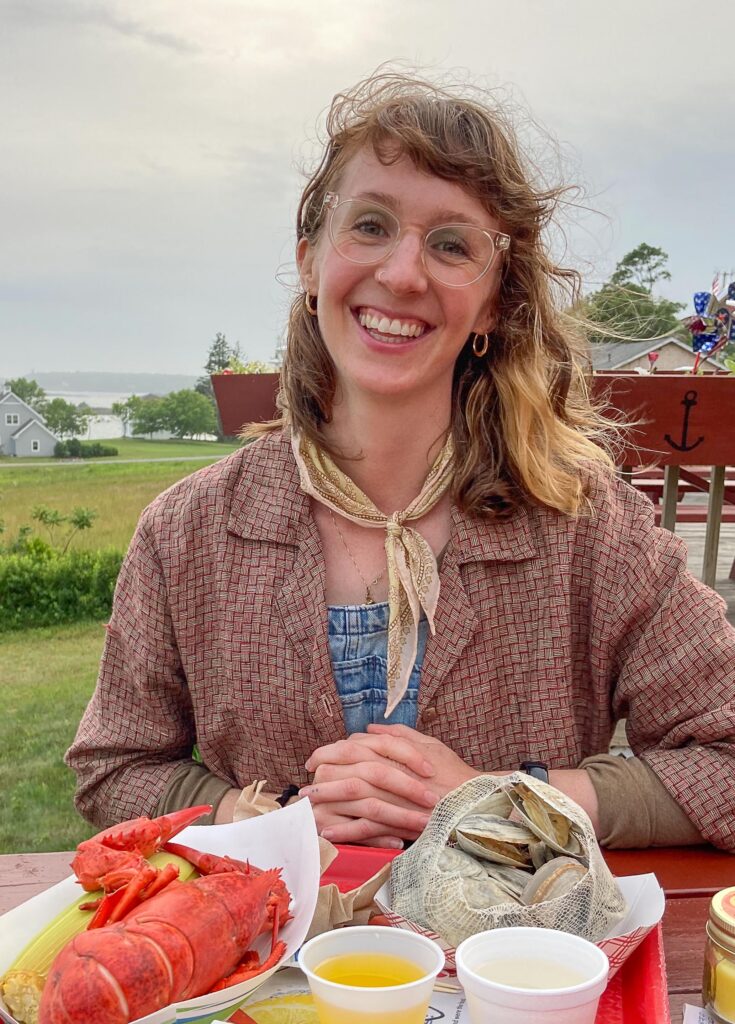 Sarah shared with us that “my research on shellfish populations and estuarine ecosystems is attempting to fill data gaps and support shellfish fisheries management in the Damariscotta River. We are doing this by developing alternative means to collect information on the current status of shellfish species and their predators in the estuaries and how they may be changing through time. In this effort we are collecting both environmental and local knowledge data. Used together, local knowledge and environmental data work together to provide a more complete picture of what is actually taking place in the estuary.” 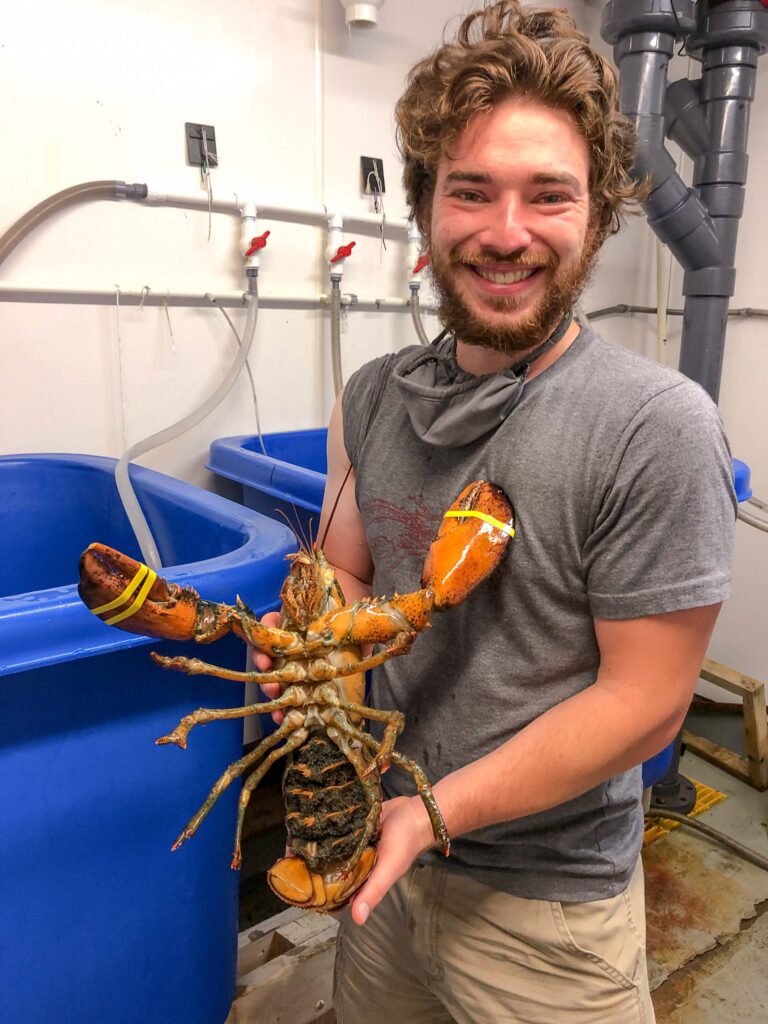 When asked about his research Alex shared “my work focuses largely on trying to understand why some larvae survive to recruit successfully, and others do not. Studying a process which involves small planktonic larvae which are spread throughout the ocean requires a lot of creativity and collaboration in how we approach our research. I find this to be a really unique and rewarding way to study the ocean.” 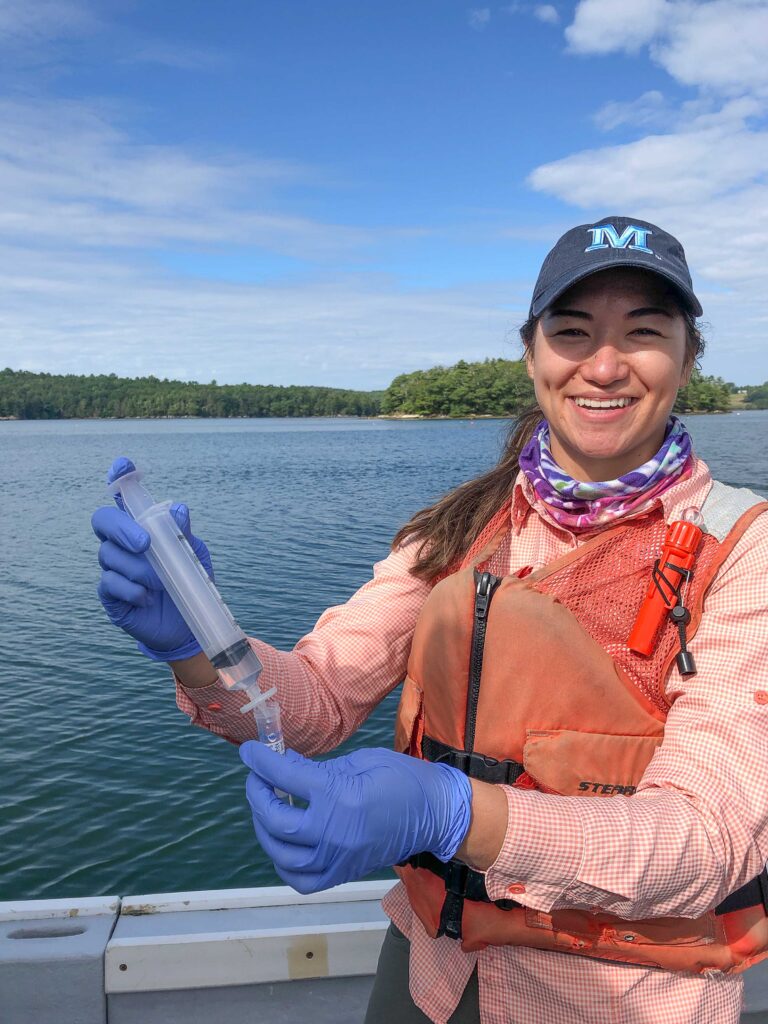 When asked about her work Rachel said “I study tiny organisms  that live in the water and mud in Damariscotta Lake and the Damariscotta River estuary. I want to know which microbes are present and where, how they make a living ,  and how that affects the environment. It is neat how such small creatures can create complex networks and relationships in a small area. I think it is interesting how these small organisms have a large impact on the environment, which affects us as humans.”

These events are free, however space is limited and tickets are required.

To express interest in joining us along the beautiful shores of the Damariscotta River for one of these events please complete this form to indicate your interest.

Some events may include optional opportunities to view student research in one of our flowing seawater laboratories. The University of Maine requires that everyone wear cloth face coverings in all indoor spaces, including our laboratories and to access restrooms.

**Space is limited, completing this form DOES NOT guarantee a ticket to participate. We will contact those who we have space for with tickets via email**

Not able to join us this summer? Check out recordings below from our Summer 2020 seminar series.

Climate science and action for Maine’s coast and coastal communities 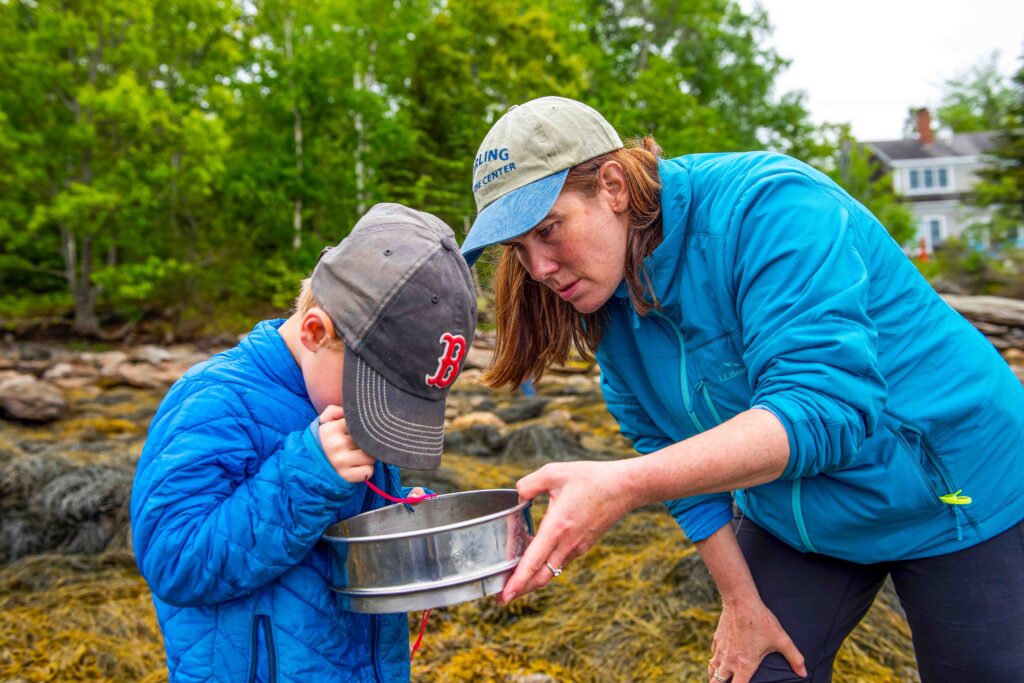 Dr. Leslie serves as co-lead of the Maine Climate Council’s Coastal and Marine Working Group. Together with 37 other leading scientists, resource managers, municipal officials, and other experts from across the state, she worked over the last year to develop strategies to cut carbon emissions and enhance community resilience in Maine’s coastal communities across the state. These strategies will be considered as part of Maine’s Climate Action Plan, which the Council will deliver to the Legislature in December 2020. Dr. Leslie will summarize the latest science and detail the coastal and marine strategies developed thus far, particularly those that relate to aquaculture, fisheries and other industries vital to Maine’s working waterfront and coastal communities. Participants will be invited to share their questions and concerns and to participate in the next phases of the Council’s work.

Untangling the links between ocean life, the global carbon cycle, and future climate

The global ocean acts as a “sponge” for atmospheric carbon dioxide, including human emissions.  One of the processes that allow this is called the biological carbon pump, which starts when tiny single-celled, plant-like organisms grow and absorb carbon dioxide through photosynthesis.  When these organisms die or get eaten, some of that carbon stays in the ocean and sinks into deeper water.  Over long periods of time this transfer keeps carbon dioxide out of the atmosphere.  However, scientists are still working out which organisms are the most important, and how they might react as the ocean warms, becomes more acidic and loses its wintertime sea ice cover.  Will ocean biology keep contributing to ocean carbon uptake in the future?  Since 2017, Dr. Estapa has been part of NASA study that is exploring these links through a series of expeditions at sea.  She will talk about the clues her team has discovered in the North Pacific, and the questions they hope to answer closer to home, in the North Atlantic. 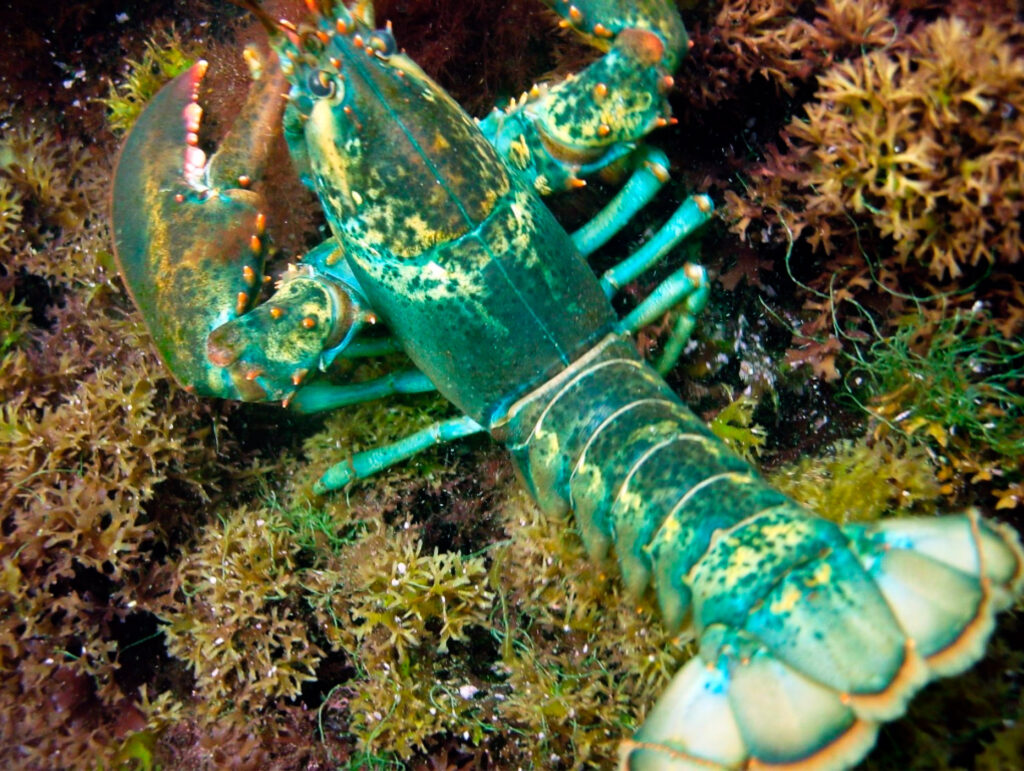 The American lobster (Homarus americanus) fishery is not only Maine’s most valuable marine resource, it is also the most valuable species harvested in the United States.  Maine’s lobster is perhaps the only species in the world to have been heavily fished for well over a century but is doing better in recent years than ever before with record landings in 2016.  One might think this is a fishery with few worries now or in the future.  However, challenges for this fishery have never been greater.  Today, the economic impact of COVID-19, international trade problems, concerns about the northern right whale and bait shortages all weigh heavily on everyone who fishes for lobsters on the Maine coast.  While many of those concerns will hopefully be resolved in the next several years, a less conspicuous but a longer-term concern relates to climate change.  The warming Gulf of Maine has generally improved conditions for baby lobster abundance but big changes may be occurring to where lobsters live.

Starting in the 1980s, Steneck and his students conducted SCUBA diving surveys of lobsters to determine in which habitats they were most abundant.  From 1989 to 1999 Steneck’s team found lobsters were primarily in shallow water– living in shelters within boulder fields.  In 2019, Steneck and his students re-examined lobster populations and found them to be more spread out on ledge and sediment habitats but not concentrated in boulder fields as they had been.  The research team also observed a thick carpet of non-native (invasive) seaweed – some of which was rotting on the sea floor.  Steneck’s team is now exploring the possibility that small pockets of low oxygen due to rotting seaweed and warmer sea temperatures may be causing lobsters to avoid boulder field shelters.  Since large predatory fish such as cod are now rare along the coast of Maine, there is little negative consequence to lobsters that choose not to shelter in place. However, this is only the start of what may become a much larger study of the indirect effects of our changing Gulf of Maine.